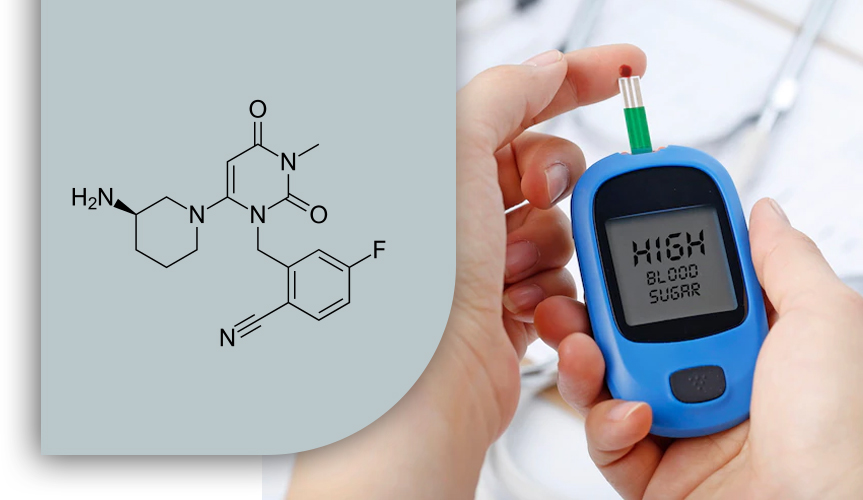 In addition to its hypoglycemic impact, trelagliptin reduces cholesterol and low-density lipoprotein. It also increases the activity of islet cells in individuals with type 2 diabetes (T2D). A DPP-4 inhibitor combined with insulin decreased insulin resistance in senior T2D patients.

It was in terms of potency against human DPP-4. And its superior selectivity and slow-binding characteristic may contribute to its long-term effectiveness.

By maintaining certain reaction conditions, you can get a high purity succinate salt of trelagliptin.

Medical Use Of Trelagliptin Succinate

The pathophysiological foundation of metabolic disorders is insulin resistance. It substantially increases the risk for type 2 diabetes, coronary heart disease, fatty liver, obesity, and hypertension, among other diseases.

Any disruption in the translocation of GLUT4 will decrease glucose absorption. And eventually, lead to insulin resistance.

It regulates blood glucose levels by inhibiting DPP-4. It is an enzyme inactivating the incretin hormones glucagon-like peptide-1 and glucagon-dependent insulinotropic polypeptide.

The synthesis has gotten much attention because of its unusual therapeutic efficacy and strong market potential.

The original corporate process began with 4-fluoro-2-methylbenzonitrile. It was brominated to produce 2-bromomethyl-4-fluorobenzonitrile and the dibromide 3′ and was subsequently transformed to compound 3 in the presence of diethyl phosphite.

The compound got condensed with 3-methyl-6-chlorouracil to get the crucial intermediate 4. It was subsequently nucleophilically substituted with unprotected (R) -3-aminopiperidine. These reaction conditions yielded trelagliptin.

The nucleophilic substitution is crucial in the synthesis to achieve high regioselectivity. Zhang et al. reported replacing the substance with (R)-3-N-protected-aminopiperidine to avoid the creation of the regio-isomer in 2016. However, the subsequent deprotection procedure may yield additional impurities due to cyano-hydrolysis.

Side Effects Of Trelagliptin Succinate

It may lead to hypoglycemia (0.15%). In such cases, provide medicine while carefully monitoring the patient’s condition. Other DPP-4 inhibitors link to significant hypoglycemia and even loss of consciousness when used with Sulfonylurea medicines.

Furthermore, if low blood sugar happens due to taking this drug, it can get treated with sucrose. Hypoglycemia caused by glucosidase inhibitors, on the other hand, should be treated with fructose.

The Japanese Ministry of Health (MHLW) approved the medicine in March 2015. It got approved based on the favourable outcomes of phase III studies in T2DM patients.

Trelagliptin had completed phase II trials outside of Japan. However, Takeda decided to stop developing it in the United States and the European Union in October 2014. It was due to the high expenses of getting permission in these countries.

People with the following health conditions should be careful while administering the drug. That’s because it may lead to further complications.

Trelagliptin is a succinate salt that has given promising results in reducing insulin resistance, thus alleviating type 2 diabetes. Trelagliptin succinate gained approval in March 2015 In Japan. Even with successful results, you still need to be cautious while administering the drug.

For the best quality active pharmaceutical ingredient company, you can check out our website or call us if you have any queries.