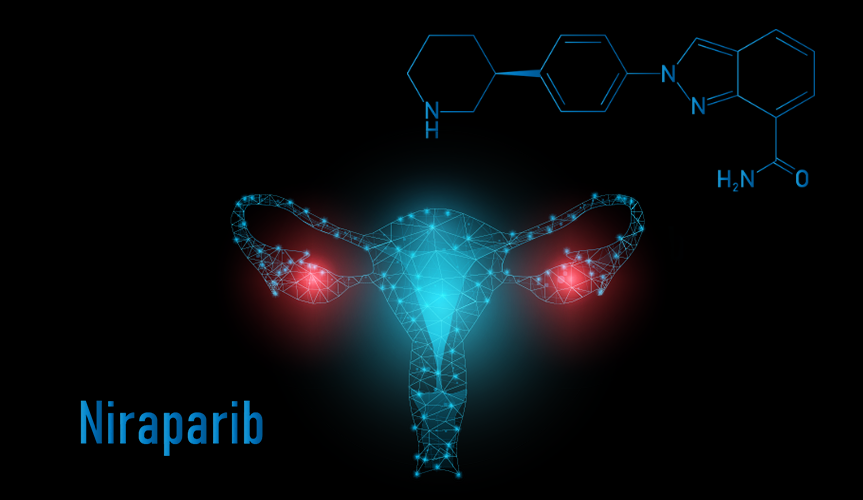 Ovarian cancer today has become one of the major illnesses in women across the globe. As per a trusted source, ovarian cancer is the fifth most common cause of death in women due to cancer. However, API and active pharmaceutical ingredient manufacturers are working actively to treat ovarian cancer, and Niraparib is one of those successful medicines!

But what exactly is ovarian cancer, and how can Niraparib help doctors cure ovarian cancer in their patients? Moreover, what common side effects of Niraparib can be seen in the patients taking this medicine? Let’s uncover answers to all such questions in our blog below!

What is Ovarian Cancer?

Ovarian cancer is a type of disease in which the cancer cells develop at the ovarian site of the women. Ovarian cancer starts at the ovary’s epithelium and may not show the symptoms at first. However, the patients will experience some symptoms that may worsen with time.

In older women, ovarian cancer is likely to cause premenstrual syndrome, bladder issues, and irritable bowel syndrome. The patients may also suffer from some of the conditions such as:

You must consult your doctor on an immediate basis if you experience these symptoms for more than two weeks.

What is the Cause of Ovarian Cancer?

Ovarian cancer is mostly caused in women in ovarian or egg-producing areas. These cancer cells then spread actively to other body parts if left untreated. Although the experts have not found a string accuse of ovarian cancer in women, several reasons may shed some life to ovarian cancer.

Treatment of Ovarian Cancer with Niraparib

So far, we have discussed ovarian cancer – its effects, causes, and common symptoms. But how to treat ovarian cancer is the main question! Over the years, experts and API manufacturers focused on discovering the treatment for ovarian cancer. And with a lot of research and tests, Niraparib was finally launched in the market.

Niraparib is an inhibitor of PARP (poly(adenosine diphosphate [ADP]–ribose) polymerase), which helps to treat ovarian cancer. Nirapairb medicine is generally given to patients that already taken the first line of treatment, i.e., platinum-based chemotherapy.

Nirapairb is given to patients in capsule form in 100 mg or 200 mg dosages. The dosage is given per doctor’s prescription, and the medicine must be taken daily in the morning for best results. Niraprib helps to reduce the multiplication of cancer cells and eliminates the chances of getting cancer back once treated.

A Brief About Niraparib

Niraparib is an anti-cancer drug mostly used to treat ovarian cancer in women. The medicine is also sold under the name Zejula and is commonly taken by mouth in capsule form.

The chemical properties of Niraparib are as follows:

Common Side Effects of Niraparib

Although Niraparib is a safe drug for treating ovarian cancer, certain side effects may be seen in some patients taking this medicine. To name a few, we have:

It should be noted that a patient may not suffer from all of these symptoms at once. However, you must consult your doctor if you have any of these.

It should also be noted that pregnant or breastfeeding women must not take these medicines as they can cause serious issues for their infants or fetus. Besides, if you are allergic to aspirin or have heart and liver disease, you must also not take Niraparib.

Ovarian cancer is a serious disease caused in women due to cancer cells. The cancer cells first target the egg-producing area in women and then slowly spread to other body parts if left untreated. The most common symptoms of ovarian cancer are fatigue, pain in the abdomen, blood in the vagina, etc.

Niraparib is a string anti-cancer medicine that is launched to treat ovarian cancer. API manufacturers mostly use Nirparib to stop the spread of cancer in patients who have taken the first-line treatment. Nirparib is sold by the common name of Zejula and has a molar mass of 320.296 g/mol.

Although Niraparib is safe, patients with heart and liver disease should not take this medicine. Furthermore, pregnant women should also limit themselves from taking Niraparib as it may damage their fetuses. Some common side effects of Niraparib are constipation, headache, nausea, rashes, cough, cold, and anxiety. Niraparib is one of the best medicines that treat ovarian cancer in women of all ages and geographical conditions.

What’s the Difference Between Hepatitis and Cirrhosis?

What Are the Various States of Hepatitis B?