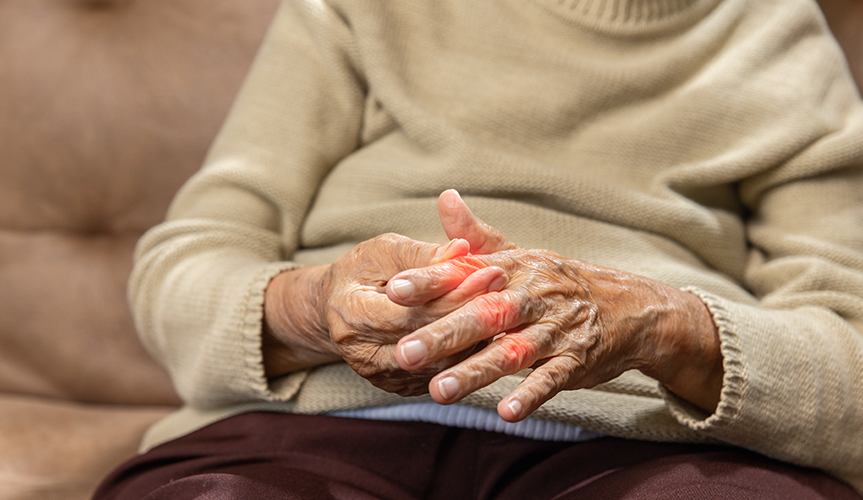 Arthritis is the swelling and tenderness of one or more joints. Pain and stiffness, which typically worsen with age, are the main symptoms of Arthritis. Osteoarthritis and Rheumatoid Arthritis are the most common type of Arthritis.

Osteoarthritis causes the breakdown of cartilage that covers the bone where they form a joint. Whereas rheumatoid joint attacks the joints, beginning with the lining of joints.

The main goal of arthritis treatment is to reduce the symptoms and improve the quality of life.

The most common symptoms of arthritis involve the joints. It includes pain, stiffness, redness, and decreased range of motion. Risk factors for Arthritis include;

You are more likely to develop the symptoms of Arthritis if any of your family members (parents or siblings) have this disorder.

The risk of arthritis-like gout, rheumatoid arthritis, or osteoarthritis increases with age.

There are high chances of women developing rheumatoid Arthritis, whereas gout is very common in men.

People with obesity have a higher risk of developing this disorder. Carrying excess weight puts stress on joints, especially on the knees.

People with a history of joint injury while playing sports are more likely to develop arthritis in the joint.

These methods can detect problems within the joint that may be causing the symptoms. Examples include;

X-ray helps you identify bone damage, cartilage loss, and bone spurs by using the low radiation levels to visualize. It may not reveal the early damage, but it can help you track the disease.

CT scanners take x-rays from different angles to create cross-sectional views of internal structures. It can visualize both bone and surrounding soft tissues.

MRIs can produce more detailed cross-sectional images of soft tissues such as tendons, cartilage, and ligaments. It is the combination of a strong magnetic field with radio waves.

Ultrasound uses high-frequency sound waves to image the soft tissues, fluid-containing structures near the joint, and cartilage. It is also used to guide needle placement for joint fluid removal or injecting medications into the joint.

Treatment of Arthritis focuses on improving joint function and relieving the system of joint function. It would be best to try different treatments to find out what works best for you throughtypes of pharmaceutical raw materials.

Depending on the type of Arthritis, the medications used to treat it can vary. Commonly used arthritis medications include;

Stronger NSAIDs can cause stomach irritation and increase the risk of heart attack, so it is better to avoid such drugs.

It is available in creams and gels to use on joints.

There are varieties of ointments and creams containing menthol or capsaicin, making hot peppers spicy. Rubbing these over the joint may include transmitting pain signals from the joint itself.

Corticosteroid medications such as prednisone help reduce inflammation and slow damage and pain in joints. Apremilastis used for the treatment of arthritis.

It is known as disease-modifying antirheumatic drugs, specifically used to decrease inflammation. It helps you to ease inflammation and pain temporarily. It slows the progression of RA, which means you will see fewer damages and fewer symptoms over time.

Plaquenil, Arava, Trexall, and Azulfidine are examples of DMARDs.

Arthritis disease can be treated simply by blocking the specific pathways made by immune cells. For that, one can take injectable drugs known as biologics. It reduces inflammation. Doctors prescribe biologics when DMARDs are not enough to treat the RA system. It is not recommended for people who have an infection or compromised immune system. Because later on, it can raise the risk of serious infections.

Actemra, Rituxan, Remicade, Enbrel, Cimzia, and Humira are the most common biologics.

Your doctor may prescribe JAK inhibitors when your biologics and DMARDs are not treating RA well. It includes baricitinib, tofacitinib, upadacitinib, etc. Before starting JAK inhibitors, ask your doctor to update all other immunizations, including zoster vacations.

Runny nose, sore throat, cystitis, congested nose, and shingles are the most common examples of side effects of the drugs.

It comes as an oral drug and a rectal suppository, available over the counter without a prescription. It can treat mild to moderate pain, but it does not have any anti-inflammatory activity.

It carries the risk of severe liver problems, which include liver failure.

Unless instructed by the doctor, it is better not to take ibuprofen for more than several days. OTC ibuprofen is the most common NSAID. Taking these drugs for a long time can cause stomach bleeding.

It is an OTC NSAID used as an alternative to ibuprofen. It causes mild side effects.

It is an oral pain reliever used to treat mild pain, fever, and inflammation and can be used to prevent heart attack and stroke.

Capsaicin is a topical OTC cream that may relieve mild pain caused by RA. you can rub this cream on painful areas of your body to get relief.

It is an approved drug to treat joint pain, including hands and knees. It can cause similar side effects as ORAL NSAIDs, making them less likely to have side effects.

It fights the damage caused by autoimmune diseases such as RA. it can make you more prone to infection and illness. If the doctor prescribes one of these drugs, they will monitor you closely during the treatment.

Rheumatoid Arthritis is the most common form of Arthritis. There are so many treatments and medications available, which you may take according to your symptoms. The doctor may be likely to find one that eases your RA symptoms. You can visit our website or call us to book an appointment to learn more about the drugs used in treatment for Arthritis.

Rheumatoid Arthritis and Heart Health: Things You Need to Know